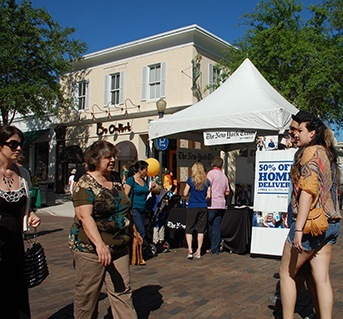 This was my first shot at Winter Park after three years of applying. I had to read it twice when I got the acceptance, I was so excited. A lot of my friends seem to judge their Spring season in terms of acceptance to this show, everyone was excited for me and I don't think I came up for air during the months of January and February, making new work to show. I had done Gasparilla two weeks before which was a great show for me and was looking forward to Winter Park.

It's a huge show laid out in the central park of the town on meandering sidewalks and wood chip lanes. There is one long row set across from the main drag but it gets full sun all day, the rest of the show is mostly under trees.

I was on the sidewalk path which I believe is better than the wood chips which can get hard for buyers to figure out and hard to roll a stroller through. The booths on the street seem to me to be the prime spots, I asked one artist how he got this great spot and he said he pays his booth fee the first day and requests it but there are always trade-offs as these people have to set up at 3 am because the road doesn't close down until midnight the night before the show. But the load out for them is much easier at the end of the show as they can just drive up and pack, while the rest of us had to lug our stuff over the train tracks (ugh) or wait for the others to drive off to get a parking spot. Expect to be there a while.

Dollying in was the name of the game on Thursday and it wasn't so bad as the show is so incredibly thought out and organized. It was around 85 degrees that day so lugging all out stuff was not a piece of cake but also wasn't as bad as some I have had.

I was hosted by a wonderful husband and a wife who was on the board of directors of the show and stayed right in the town and serindipidously got to see the inner workings of the show.  I have to say, the all volunteer show is like a fine instrument, tuned to perfection. Our hosts became friends, as that often happens, and it was a short car ride from their house to where there was artist's parking every morning (right across from the booths).

Friday was a beautiful day, tons of people coming from town and also from the Sunbelt train, which runs through the center of town and brings people in from Orlando and surrounding areas. Judging was thoughtfully done and every judge asked questions and engaged each artist, it doesn't get any better and I believe they chose great awards. I didn't win anything... but as I said to someone; "Going to Winter Park was like goes to the "Oscars" of shows, just getting in makes you a winner.". This year the judging changed, I was told and they considered your whole body of work instead of focusing on one piece and then the artist decided what to bring up a representative piece to be judged again (second round stuff) Other artist's said they liked this better.

Food was plentiful at the hospitality tent. Saturday morning the crowds were out in force again but last year they let the trains run for free. They stopped that this year apparently because at the end of the show each day there was such a back-up of people they had to send another train to take everyone back to Orlando. Shame, because I was expecting wall to wall people and I was a little surprised. But then again, the forecast was rain so maybe they just were coming Sunday instead. It was full-on rain from around 1pm on and it pretty much cleared out the show. I didn't go to the artist party, I was wet and beat... but I heard there was incredible food and drinks.

Sunday was better and the sun was out most of the day and it was incredibly crowded, but many were tire -kickers-for me at least...and Sunday was my least profitable day. No-worries, it was a good solid show and I was so pleased to be here. Many people walking by said it was a year where there were many new artists and they were happy about that. I was happy about that too since I was one of them.

All in all, it's a fabulous show where people support us and aren't afraid to put down big bucks for art and that is always a winner of a show. It's ranking is well deserved. Thanks Winter Park...hope to see you next year.